Roslyn is a novice Paladin of the Paladins' Hold stationed in Castele. A simple girl from the stables in South Castele, Roslyn is determined to prove herself within the ranks of the order.

Roslyn is something of a mascot for the Paladin Life, being featured prominently in Fantasy Life’s media.

In both the daytime and evening, Roslyn can be found at the stables in South Castele.

Roslyn hands out the following challenges when the player reaches a certain rank:

As an Ally[edit | edit source]

Roslyn can be recruited into the player's party as an Ally once they reach the rank of Master in the Paladin Life.

In battle, Roslyn wields a longsword and takes a careful approach when sizing up the enemy. She can perform a charged rising spin attack, which is similar to the player's Paladin Spin Attack.

Roslyn will occasionally bestow a buff on the player that increases their physical attack power.

Roslyn in the opening sequence 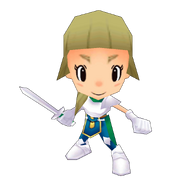 In-game render of Roslyn
Add a photo to this gallery
Retrieved from "https://fantasy-life.fandom.com/wiki/Roslyn?oldid=43911"
Community content is available under CC-BY-SA unless otherwise noted.