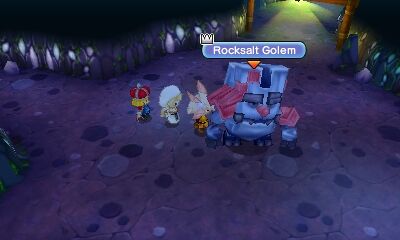 The Rocksalt Golem is a silver crown level boss which can be found in the Nautilus Cave. It's found early within the cave.

The Rocksalt Golem is alone in the area which in you battle him and is extremely slow. You are also given a decent space to fight him in, which makes this a fairly easy battle if you have the resources to battle him with.

Retrieved from "https://fantasy-life.fandom.com/wiki/Rocksalt_Golem?oldid=37329"
Community content is available under CC-BY-SA unless otherwise noted.